Theory of Inventive Problem Solving in Education. Interview with the AMPERETEX CEO on program “Segodnya utrom” (“This morning”)

“Theory of Inventive Problem Solving” or “How to raise inventors?”

We are not abandoning the idea of integrating a subject into educational programs of schools and institutions that could help pupils and students to apply skills of invention and get a chance to move in their chosen direction after graduation.

The recurring question is: Why is it important in business?

The answer is simple: highly qualified personnel! Every day hundreds of companies are looking for specialists who can not only put their knowledge into practice, but also initiate progress.

– Could you tell us about a social initiative you are taking?

“Initiative is a big word. It’s more of an idea. And, the idea is not mine. It’s more of an experience. I’ve travelled around the world and seen how leading universities work. They generate the sheer number of ideas. It all starts with a simple thing: children, first in schools and then in universities, are taught to invent, and then they are taught entrepreneurship. That’s why, today we look at the US, at China, at the new World Development Centers, as the tip of the iceberg. But under the water, there are, of course, plenty of educational objectives that are implemented in order for this institute, this university or this country to generate more inventions. We are watching on TikTok and Instagram what is going on in China, what products they are coming up with there. And I am sure the same can function in Russia as well, that it can be learnt. For more than 70 years there have been methods by which you can learn to invent”.

– So the aim of your idea is to introduce “Theory of Inventive Problem Solving” into schools, in addition to arts and crafts?

“The idea is not mine! And it would be better, if it was not in addition to something, but instead of something to be taught in school. I think there is a lot more out there that I as an employer don’t need, and I’m lacking what is in demand today “.

– And what is in demand today?

“Today we need more mental qualities such as responsibility, determination, creativity, a non-trivial approach to situations and dealing with difficulties. And, of course, being an expert in your field. However, after graduating from educational institutions specialists are still learning highly specialized skills at the enterprise. Ask any general director today, any person who comes to him is either undergoing adaptation or training. That’s where we really look at the person. And they come to us, and we hire them mainly due to their professional knowledge, but we fire them mostly because of mental incompatibility with company values”.

P.V.: Yes, actions like these, too. And getting back to our topic: it would be strange if, for example, they’d start making 2,000 planes – they make it, bring a result, some of them are even pulled out onto the runway, but only 1 out of 2,000 planes takes off. And everyone is asking, “what should we do with the ones that didn’t take off, the half-finished products that are left in hangars?” And then people realize that there has to be some kind of a system – how to manufacture an airplane so that it takes off? As it now seems from above, it’s pretty simple. But, in fact, there has been a lot of integration before the production system of this aircraft was built, so that a plane would take off at the end of the production cycle of this system. It’s the same with invention: Genrich Altshuller’s Theory of Inventive Problem Solving is our Soviet development, which has also been applied in Silicon Valley since the 1980s, and Hewlett-Packard is now working with these elements.

– So we’ve already missed the opportunity?

“This is how it often happens. We don’t appreciate what we have, but we admire what others have somewhere else. And I’d like to draw attention to the fact that we also have these developments, we have these schools and these methods. But in Oblast Kaliningrad I didn’t come across any schools that would teach the basics of Invention. You know, it’s like making a film: it seems like magic, but it’s actually done in three steps: first – clear technical problems that you solve, second – making up a film’s plot… And third – a film is ready. It’s certainly not a cure-all, it’s not a wisdom pill. But these are basic things and once you’ve mastered them, you can move on and make great films that everyone will discuss, invent some toothbrushes or hair combs, almost anything. But you have to start somewhere and then, certainly, you have to bounce the idea off and let the person who has mastered it popularize and bring a new product to market. And there is an even more important issue here, which is entrepreneurship. We have a lot of inventors who sit around inventing and writing patent applications, but they are often left on the table and don’t move forward.

– Why do you think patents are not moving forward? Don’t inventors want that, or are they afraid of it?

“You know, business is not about the genius of one person, it’s about teamwork. There is no such thing as the ideal executive or the ideal employee; in order for something to function, you have to create a team that is strong, where each member of that team is strong in their own way, and then that synergy makes it possible to give a good start to a project.

– If it were introduced as a compulsory subject, do you think everyone would be able to invent and would everyone need it?

“Absolutely everything. Inventing is a big word. The question here is innovation. Innovation is probably not even an invention. Innovation is the ability to improve a technical thing or an object itself. Anyone can improve it. You and I, each of us, having our own point of view – you look at me with one segment from your side, I look at you with the other. You do not see what is happening behind your back and I do, and vice versa. Each of us sees the world differently and each of us sees opportunities to improve it differently. Innovation is all around us: in your lift to here, for some reason you first have to press the floor button and then the “start” button in order to get up, while in some other place the floor button is enough. Therefore, the approach to making a toothbrush, for example, can also be different, combining a toothpaste and a toothbrush together: one button turns on the toothbrush and another button puts the toothpaste on the toothbrush. In a word, there are a million things around us that can be improved, and if we understand how to do it, where to start from, how to finish it, how to design it and how to market it, and then more and more entrepreneurs appear, and a much higher value is added.

– Why do you think there are still no such clubs and subjects in schools? Maybe there is no one to teach that? Apparently, there’s a need of qualified personnel?

“This is also a big problem. There must be a systematic effort here, so that we understand what for does a child study at school, why does he or she go to a technical school or university or get a job – what for? I am convinced that innovations are possible in education.

– What age is assumed, in which classes approximately?

“Every age has different tasks. For a young child, for example, a pyramid is not an easy task either. But in classes 8 or 9, it is quite possible to make a model of a waste recycling plant with a complete production cycle, and make it out of improvised items.

– When do you think the first introductions in schools will take place?

“I think it can definitely be done this year. At least, not in the school program, but in some study groups, CAS activities, or in summer development centers, for example, the Center for Gifted Child Development. We talked to them, and it’s very interesting to ask them: Kids, are you taught invention? The answer is “no”. They are taught robotics, certainly, but everything needs a system. It will be useful to study it, to show opportunities so that we can have some kind of technological leap forward, so that we can have a leap in the number of entrepreneurs who are looking for opportunities that are all around us and looking for needs that come from people and offer solutions for those needs.

– That means, from September, at the start of the school year, we can expect the introduction of the first of these classes?

“I think it will be possible even in summer, at least we would be happy and willing to help in order to show opportunity in summer schools and show how to solve these interesting problems. But surely in order for something to be done well, it has to be done systematically”.

– Who could help to introduce the TRIZ (theory of inventive problem solving) into schools as quickly as possible? Who can we turn to so that we don’t just talk, but achieve some results, how to do that?

“There’s a very cool thing – it’s a need of something. When parents or children themselves realise that they need it, they tell their teachers about it. It would be the best way if the initiative wouldn’t come from above. Not that everyone has been persuaded, both the Ministry of Education and the school principal, who would say “that’s it, from tomorrow we start a new life”. In order for that to happen, we need to create a need among children and parents, so that they realise what skills and competencies will help the child to live in comfort in this world and engage in a meaningful direction, what kind of training they need in order to become a high-demand specialist on the labour market, or even to start a big business.

– Meanwhile, is there nowhere for us to turn to?

“We could start by contacting the Ministry of Education, we could contact a particular school, a particular director of a particular institution for additional education to highlight the issue. 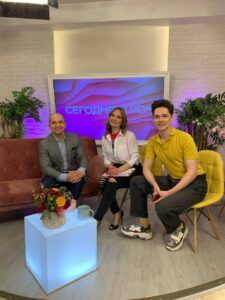